I have had a very low week. I was very unkind to myself and spent a lot of time wrapped up in my own head. A few things really got to me, but ultimately, it really showed me who my real friends were. Not to sound cliché, but I really don’t know where I would’ve been without them. So, to thank them, here’s a lil shout out to these gems in my life.♥

After a very drunken night out, I went back to my friend Amelia’s house. The next morning I woke up (hangover free, surprisingly enough), but I was quite low after occurrences from the night before, feeling just generally disposable to those around me. Amelia was determined to brighten my spirits as best she could. We spent the afternoon together, helping around her shop and playing with her lil puppy. At one stage she dragged me out for lunch which she paid for. She was 110% there for me, and even though I may not have shared the negative thoughts floating through my mind, Amelia would talk me through what she could guess to make sure I wouldn’t over think them.

A few days later, my mental health seemed as bad as ever. I was really feeling like a waste of space, unable to cope with lifes challenges. I didn’t know what to do, who to turn to. I was talking to my friend Niamh at the time and she got somethings out of me. Low and behold, the next day herself and my other fave Tom came around and we went out for coffee. Niamh brought a board game, which we covered the table of the coffee shop in. The three of us trekked across Europe in this game. In my case, I started off in Bordeaux and made my way as far as Minsk. I ended up winning, which is always fun. Before we parted ways, Niamh handed me a box of chocolate and a card, filled with the sweetest of letters. It really was wonderful.

Last But Not Least… 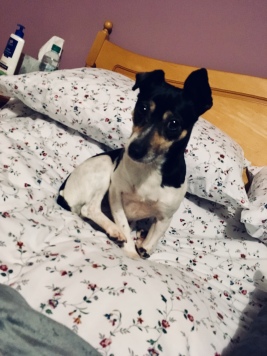 Okay, so I’m going to be superbly cheesy and explain why Emmers just has to be here. She is, most definitely, my best friend. Everyday this week, when I came home, no matter how depressed I may have been, she would jump on me and lick me and just make me smile. There’s really nothing like feeling loved when you walk in the door. To be more specific, I really hate college, and although I didn’t attend that much this week, she acted as though I was there everyday, and appeared so excited whenever she seen me. Which I was especially grateful for while feeling so disposable to the world. Then when my mind seemed to break in two and any form of mental wellbeing I had left me, she stayed with me that entire day. She even came up with me to bed, which is not something she is allowed to do. I could tell she was worried about me, that she wanted to take care of me. It really did make me feel loved. She’s the world to me and I’m so grateful to the universe that she’s in my life.

Aaaand so there you have it. That’s my cheesy post for the week. Friends are great, and they also don’t need to be the same species as you to be amazing. Goodnight one and all.